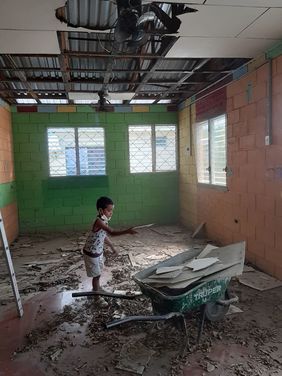 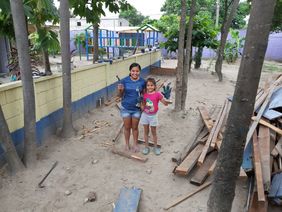 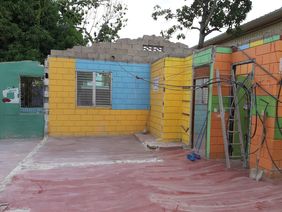 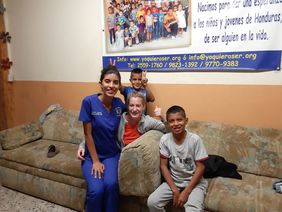 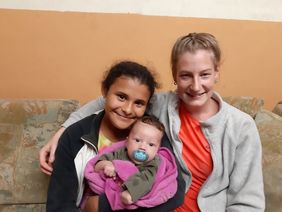 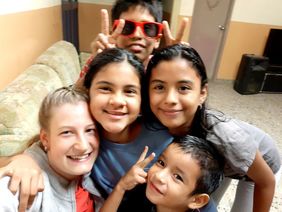 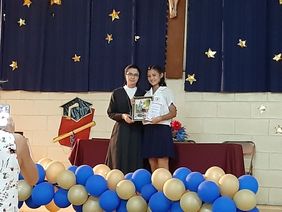 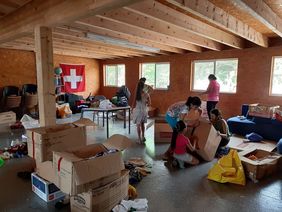 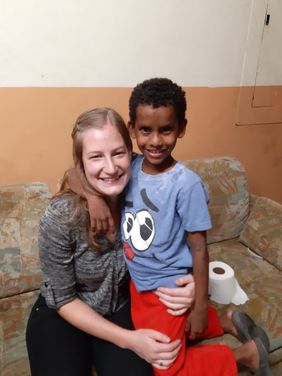 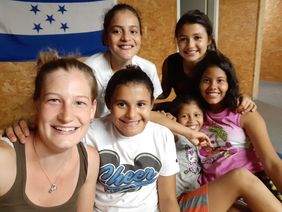 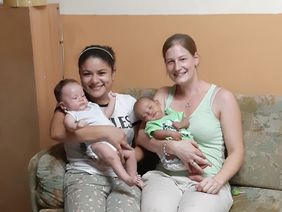 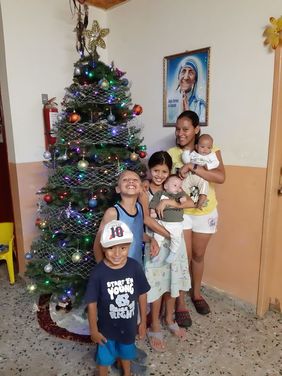 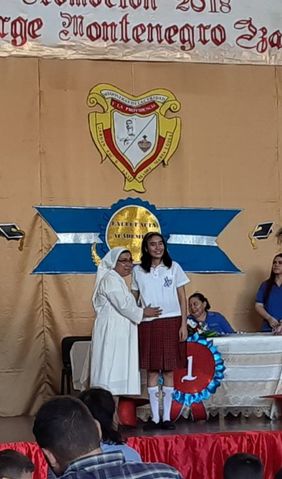 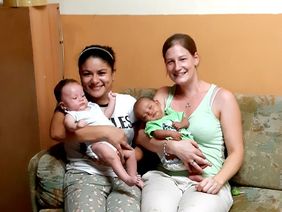 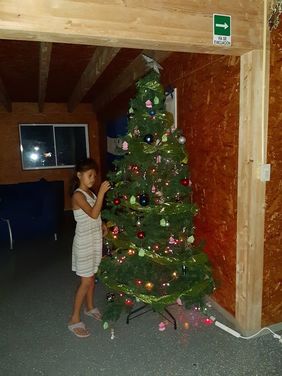 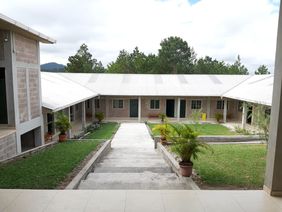 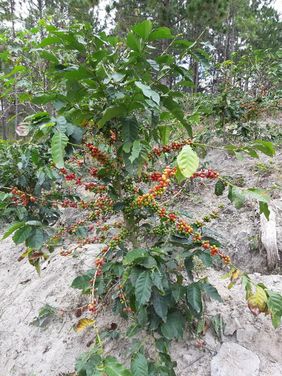 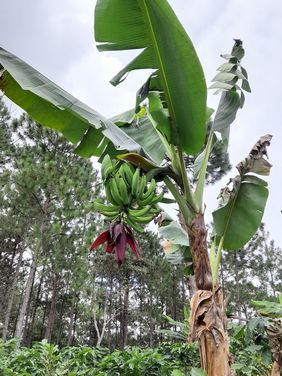 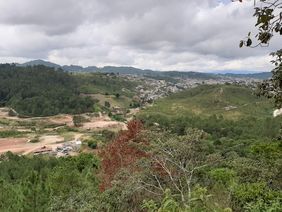 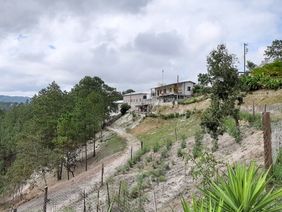 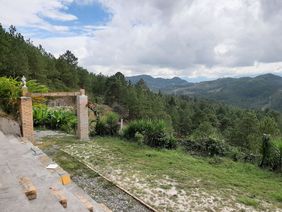 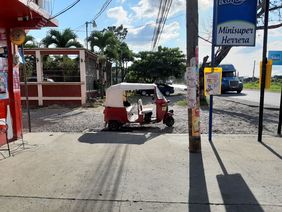 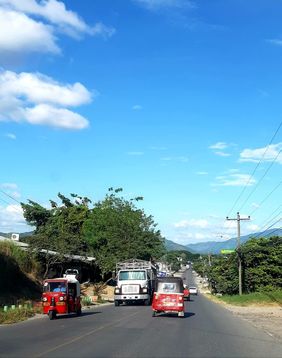 In this newsletter I will tell you how I experience everyday life in the children's home.

I, Anita 26, have been a volunteer in the "Yo quiero ser..." for four weeks now. The children and also the employees are very open and friendly. So I was able to get used to the new everyday life very quickly. My Spanish skills are not great, however the children are patient with me and have already taught me a lot.

People help each other - that became clear to me from the very first day. The older girls or teenagers look after the younger ones and also help to look after the babies. The school kids independently clean their rooms and wash their own laundry by hand and after the meal, each child washes their own dishes. The older ones broom the courtyard in the mornings and evenings. and the smaller ones collect the garbage.

During the holidays someone always helps in the kitchen and sometimes also in the ''Sala cuna'' with the smallest ones. The helpfulness of the children impresses me very much.

We had two new children, 3 and 13 years old. They came to us from another children's home. On the first day many tears flowed. Because of the language, it was difficult for me to contribute at the beginning. All the more I am happy that after a few days they have found trust in me and want to play with me.

At the beginning of the month, a container was delivered from Switzerland to the children's home. There were components for the new kitchen and for the other building as well as many other things for everyday life. It was a pleasure to unload the goods because everyone was motivated and eager to help. Then we had to sort out the shoes, clothes, toys, etc. and stow them away. After almost two days everything was sorted by size and sex and stored in boxes.

In the kitchen we already started with the renovation. Together with craftsmen from Santa Rosa and two older boys from the children's home treated the walls and got everything ready.

In the other building the rest of the crew started to remove the roof and the walls to make a big room out of two small rooms.

“Yo quiero ser…” is passionate about helping people in need - even outside the children's home. I was able to help pack 20 cardboard boxes of food for underprivileged families in the slums. We brought them to a nun's organization, which then distributed the parcels.

I was allowed to visit two of the children's schools. Both schools are run by nuns. I was invited to both of the closing ceremonies. The pupils put on their school uniforms, a white blouse and a red and black checkered skirt with white socks. In primary school they have dark blue skirts.

It was all very Christmassy decorated with blinking lights on the Christmas tree. At the celebrations the Honduran hymn always came first. Everyone stood up and sang along. The pupils learn the national anthem at school. Afterwards different speeches were held by teachers and nuns. Cesia was the president (class spokeswoman) in her class. She was therefore allowed to carry a flag with two other students and read a text from the Bible. The whole thing was accompanied by music. Sometimes it seemed a bit improvised, but this doesn't bother anyone here.

Soon it will be Christmas - you can hear it all around the children's home. The Hondurans like fireworks. It's like in Switzerland on August 1st, our national day. I think it's very special to celebrate Christmas like this. But as they say so beautifully, other countries - other customs.

In the children's home it's time to get the decoration up. The Christmas trees are already decorated and the crib figures are also ready. With the help of the employees, the children decorated all the doors for Christmas.

Besides tinkering and painting, the children like ball games, puzzles, Lego, Monopoly, UNO, etc. and Columpio, which means "swing" in Spanish.

I was astonished about the totally broken “table football”. The children love to play with it and have a lot of fun. Although the sticks fall out over and over and the players are partly no longer fastened. This is a good example of how quickly they are satisfied with something.

The way I feel it, the children are very grateful to have such a home and they appreciate it. It is like a huge family.

Now I am looking forward to Christmas. The children can hardly wait. It will certainly be different than I am used to. They told me about a big party with singing, dancing and playing. I am curious about that.

I was allowed to go to Santa Rosa with Gustavo, an employee. We had to deliver parcels with food. The distance is more than 160 km. We had about five hours, including half an hour break. The roads are in a fairly bad state and have loads of big potholes. Since they are improving the roads there are several construction sites. I am used to wait maybe max. up to 5 minutes at a traffic light but here it can take between 15 and 30 minutes.

The ACEP (Academia de Excelencia Profesional) building is located just outside the city and surrounded by beautiful greenery in the hillside. When we arrived there, we were greeted by the three boys from the children's home. They are there for a few days during the holidays to help out.

After we unloaded the parcels, Josue, a teen from the children's home, showed me the surroundings. They grow coffee, bananas, platanos and tomatoes. I saw for the first time how coffee is made. I like to drink a lot of coffee, but I never thought about the journey it travels until it makes it into my cup.

In addition to the plantation there is a nurse school, a computer school, a course room for resuscitation courses and biomedical training.

After lunch we said goodbye and drove back to San Pedro Sula. On the way we passed many small vehicles on three wheels. These are so-called "Touc Touc". They come in all colours and are used as taxis.

In the city there was a lot of evening traffic, which made the journey home more difficult. After this day I was very tired. But I liked it and I enjoyed it very much.