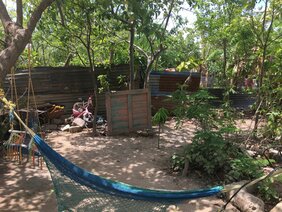 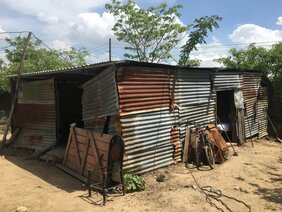 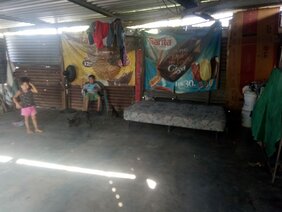 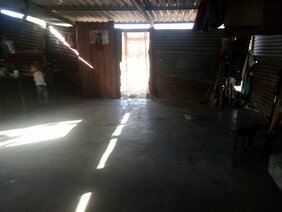 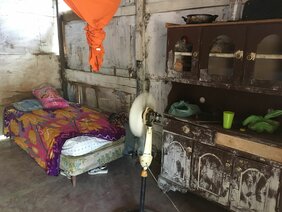 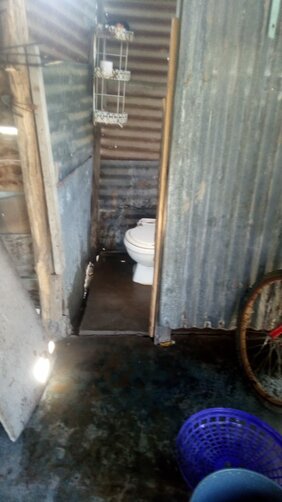 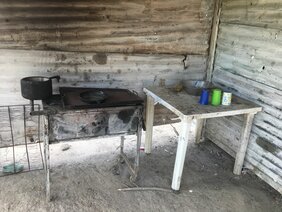 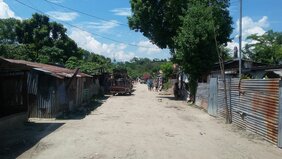 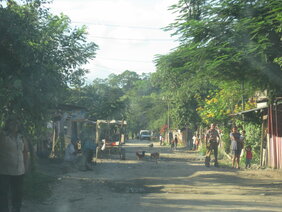 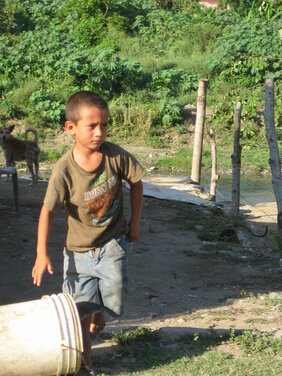 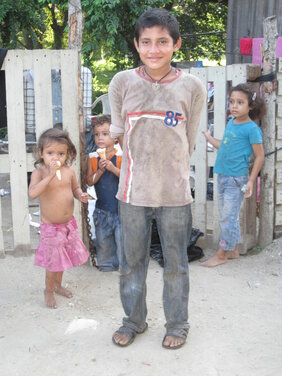 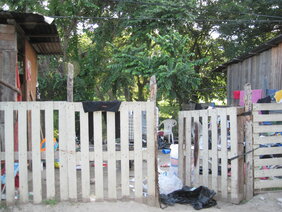 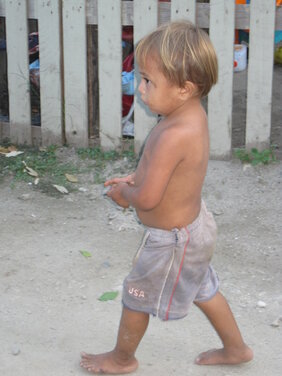 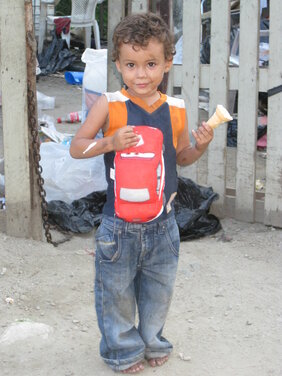 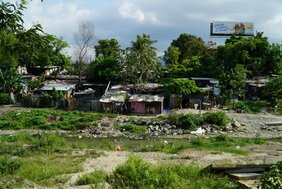 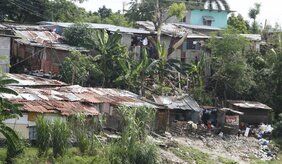 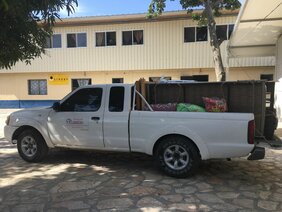 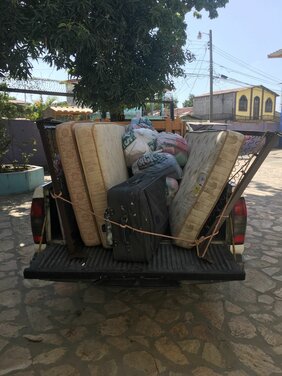 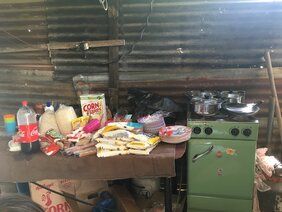 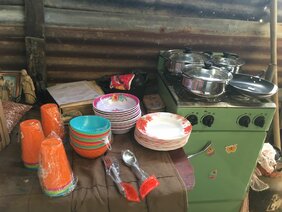 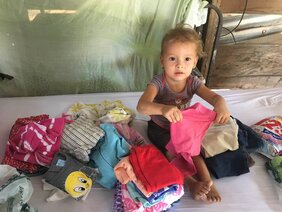 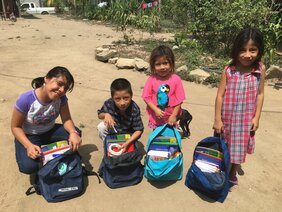 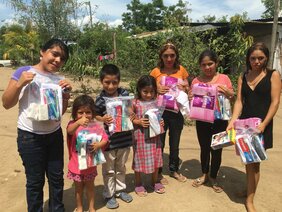 Poverty and its consequences

Thousands of Honduran children live in extreme poverty. According to the World Bank, Honduras is the poorest country in the world after South Africa and Haiti. In concrete terms, this means that 17.2% of Hondurans have to live on less than US$ 1.90 per day and 52.6% on less than US$ 5.50 per day.

Around San Pedro Sula, one phenomenon has become increasingly acute in recent years: resettlement from rural areas to the slums of the big city. Due to longer periods of drought, harvests are lost, and many small farmers are forced to leave their homes. They seek refuge in areas near the river on the outskirts of the city and hope to find work in one of the many clothing and other industrial factories. According to figures from the CASM (Comisión de Acción Social Menonita), the number of families living in the slums around San Pedro Sula has more than quadrupled in the last ten years.

More than 95% of the people living in the slums have not graduated from primary school (completing the 6th school year) and the illiteracy rate is 17%.

In addition to the most obvious consequences of poverty, such as lack of access to health, education and nutrition, hundreds of girls and boys are victims of sexual assaults every month. The vast majority of sexual assaults (over 90%) take place in extremely poor dwellings built of wooden boards and advertising signs, where five or more people sleep in a single bed. In these huts it happens again and again that a girl is sexually abused by her stepfather or another man with the consent of her mother, because she receives money, food or objects which she would otherwise not be able to buy (e.g. cooker, pans, gas cylinders).

This inhuman and illegal practice is widely accepted by the family in a world where everyday life is marked by the struggle for survival, which is why there are often no charges arising from the abuse.

According to the Violence Observatory of the National University of Honduras (UNAH), more than 17,000 girls under the age of 18 have been sexually abused in the last decade. Feminist organizations estimate that the realistic figure is over 50,000.

In the children's home "Yo Quiero Ser..." we have welcomed and supported children from families who have suffered the same fate in the periphery of San Pedro Sula. Here is the story of a 13 year old who joined us in November 2018 with her 3 year old niece.

The girl, like her sisters, was subjected to the abuse and sexual assault of her stepfather for years. The mother tolerated the actions for the above-mentioned reasons and from the assaults on the sisters one was impregnated and gave birth to a healthy child in 2015. The stepfather was reported and arrested after a tip from the family. However, the 13-year-old suffered irreversible psychological damage, which manifested itself in aggressive behaviour towards her fellow people, endangerment of herself and changed sexual behaviour. The DINAF (Dirección de Niñez, Adolescencia y Familia) asked the "Yo Quiero Ser..." for help because they were at the end of their rope in regards to the girl's behaviour. Despite professional care by psychiatrists and the use of medication, the girl could not fit into the group of the children's home. There were repeated clashes, violence and sexual assaults, so she had to leave the home in June 2019 to protect the other children.

The best option for the girl would have been an inpatient stay in a psychiatric hospital. There are three public psychiatric hospitals in Honduras where adults and children are treated. However, there is no centre where sexually abused children could be accommodated and so another solution had to be found.

According to DINAF, it was not possible to send the 14-year-old back to her home. The resources were simply not sufficient to care for the mother and the seven children including 2 grandchildren. Fortunately, the foundation "Yo Quiero Ser..." has the possibility to support families in such situations. A pick-up truck with three beds, clothes, hygiene articles, cooking utensils and food was provided for the family. The family also receives a monthly ratio of food, toiletries and other essentials to survive.

Due to the still ongoing investigations against the stepfather, the little niece cannot return to the family and therefore lives well integrated in the children's home "Yo Quier Ser...". The 14-year-old is still in outpatient psychiatric treatment and visits her niece together with her family more or less regularly.

An extremely sad fact from the tragic story is that the stepfather will most likely be acquitted for lack of evidence. Because one of the girl's sisters, who was also a victim of his abuse and assaults, testified that she agreed with the actions and that it was therefore not a sexual assault. The same seems to be the case in a large majority of cases of abuse and the supposed justice is left out.

According to feminist organizations, most abuse of minors goes unpunished. In the few cases that are brought to court, only 50% of the accused are convicted. The reasons for this are, on the one hand, that the parents do not file a complaint to protect their relatives and, on the other hand, that the state does not have a specialised department for dealing with such crimes.

The increasing social instability of the country is favouring the increasing poverty and the associated crimes against minors. For these reasons, it is essential to spare as many children and young people as possible from such a fate and to get them out of the downward spiral of poverty by building a dignified life through education.